Oh Dear God!!! I am editing this post about 24 hours after its creation to include this epiphany with all: I am actually now collecting (quite forcibly) some cool/some not so cool, ancient, antiquated, American relics...I mean the living/breathing kind...as in OLD PEOPLE! I've gone from collecting kids, to cats, to various inanimate objects, to mentally ill people, back to kids, to old people. What is wrong with me? All I can say is: Thank God they don't come home with me!

If you scroll down you'll see my typed post, which does not repeat what's computer generated here. My eldest son has my chalk and chalk pen, so I cannot post using my antique slate board at this time. I'll have to work on that. I do think I can combine the two mediums to make an interesting blog.

It's a new year with some old carry-overs from the last year. Such is the nature of life. My progress toward the objectives I've set forth for 2013 is minimal at best. So, I'm getting a slow start, but I'm not going to let that deter me. I'm determined to have a productive, successful, and happy 2013!

This post is a bit of 2012 in review and a smidgen of 2013's expectations. I'm going to attempt to take a person-centered approach this year in hopes of keeping things real and reasonable; people oriented with, well:

Stir gently, kneed and roll out on wax paper. Slice with cookie cutter, lay out on an ungreased cookie sheet, and bake for 20 minutes at 400 degrees or until golden brown.

As a side note, I'm still working on perfecting this typing thing so there are some definite imperfections in this post. I did get a new digital camera for Christmas though and I'm hoping it will make reading these posts much easier for the few followers I have.

Wishing everyone a joyful and abundant New Year! 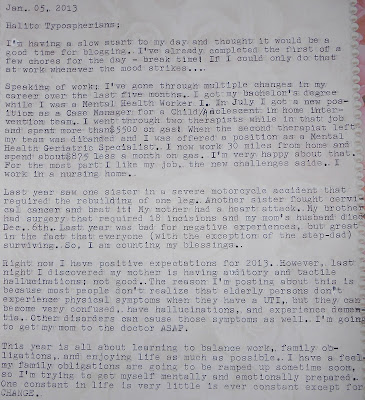 Bell Stone
About the profile pic: It is one of my own pieces of art done in ink. Swiper no swiping, Swiper no swiping, Swiper no swiping! I'm unattached, have three adult children, two grandchildren, and a great grandchild. I'm not old, really. I work in the Mental Health Industry as a Case Manager on a Child and Adolescent In Home Intervention team. I go into homes, schools, Juvenile Probation offices and other places to work with and help these children and their families. It's a very noble cause and I LOVE it. The primary goal is to keep at risk children in their homes. I am also on Team V.A.L.O.R. (Veterans' Advocates Leveraging Occupational Resources) servicing Veterans, Service Members, Wounded Warriors and their families. This is one of my primary passions. Everyone on the team is a volunteer.